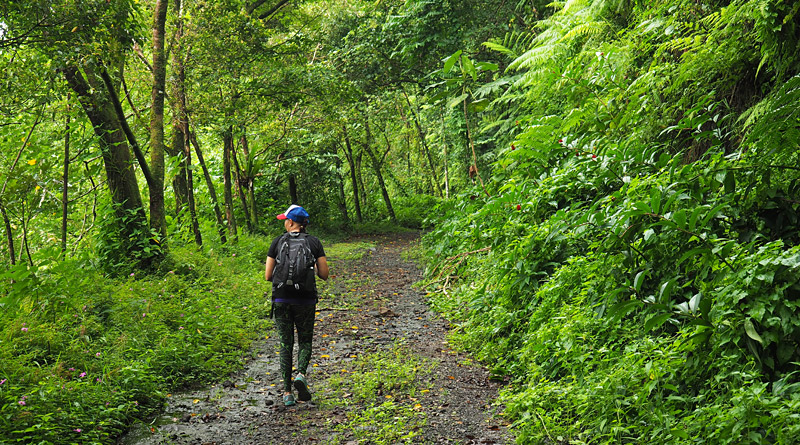 It might come as a surprise that the United States’ most remote national park isn’t in Hawai’i or even in the frozen wilderness of northern Alaska. This hardest park to reach — for Americans anyway — is almost 8000km from the US mainland, yet it’s just a few hours’ flight from Auckland.

The National Park of American Samoa is unusual for other reasons too. It’s the only US national park in the Southern Hemisphere and the only one where the land is leased from villagers rather than owned by the federal government. It’s probably also the only park where the star wildlife attraction is a giant fruitbat with a wingspan of more than a metre.

The park is a boon for visitors because it means large chunks of American Samoa are accessible to the public as of right – not always the case in the Pacific, where land is often locked up in traditional ownership – and the deep pockets of the US government mean the territory has a network of well-maintained trails.

And while independent Samoa, 100km to the west, is cheaper, more traditional and has a lot more in the way of beachside accommodation, it can’t compete with the US territory for sheer jaw-dropping scenery.

The National Park of American Samoa covers 5300ha, about a third of which is underwater, making it the third smallest national park in the US. It is split over three islands with 10 of its 13 walking trails on the main island, Tutuila. The walks in American Samoa vary from a 200m amble along a beach to an 11km return slog to the top of Mt ‘Alava, a peak overlooking Pago Pago Harbour.

They aren’t like the multi-day tramps of New Zealand national parks but that’s not surprising when you consider even the biggest island is just 33km long and at most 5km wide.

My guides to Tutuila, Michael McDonald and Paula Stevenson-McDonald, only discovered the island’s potential as a walking destination by accident.

Both were born in American Samoa and educated on the US mainland. When they came home in 2012 they made it their mission to promote physical activity and combat the territory’s obesity rate, which is alarming even by Pacific standards.

The couple opened a fitness and water sports centre, founded an outrigger canoe club, and organised a series of running events.

“We wanted to add some hikes so we started checking out our backyard, and we realised it’s beautiful. Now we’re doing our best to show it off,” Michael said.

So quite by accident the McDonalds’ fitness venture morphed into a tourism business they call Best Tours. With tourism in its infancy in American Samoa they’re not exactly swamped with visitors, but most of the customers they do get are keen to stretch their legs in the national park.

The most popular walk on Tutuila is the World War II Heritage Trail, which starts at Blunt’s Point, a headland overlooking the entrance to Pago Pago Harbour, and follows a ridgeline above the harbour’s urbanised southern shore.

World War II never reached American Samoa but with one of the best harbours in the South Pacific the US made sure it was well defended by peppering the hills with naval cannons and anti-aircraft guns. Some have been restored, such as the gun emplacements on Blunt’s Point, while others have long since been reclaimed by the bush.

Pago Pago came under attack just once, Paula told me. To avoid the harbour’s defences a Japanese submarine surfaced on the far side of the island and lobbed a series of shells over the hills. Most landed harmlessly in the harbour; ironically, the only building hit was a store owned by a Japanese-American trader.

The two-hour heritage trail involves a bit of scrambling over rocks and roots but it’s well maintained with ropes and even concrete steps at the steeper sections. Apart from big guns you can see the remains of bunkers and even a star mound, a far older relic dating back to the chiefly sport of pigeon hunting.

For me, however, perhaps one of the most unusual sights on the trail was an American Samoan couple out for a walk in full All Blacks kit. Manaia and Laurie Fruean must be the biggest rugby fans in a territory where American football is king.

Manaia explained he had been a “hardcore fan” since 1989 and they were wearing their All Blacks gear to celebrate New Zealand’s victory at the San Francisco Sevens a day earlier. He got some flak for not backing Manu Samoa but said the All Blacks had introduced him to rugby.

Over the next few days Paula and I sampled half a dozen walks on Tutuila. Highlights included the Vaitogi Lava Fields Walk, where jagged fingers of jet-black lava jut into a crashing sea, and, on my last full day on the island, the Mt ‘Alava Trail to a hilltop overlooking Pago Pago Harbour.

While Mt ‘Alava isn’t particularly high (495m) and the track isn’t steep, the tropical heat can make even a gentle slope challenging. We started early in the morning and were lucky with the overcast sky, but still welcomed the shade provided by lush, intensely green bush.

Even on Mt ‘Alava, however, the modern world isn’t far away. We caught whiffs of the tuna canning plant, American Samoa’s biggest employer, and birdsong competed with the hum of machinery from the Ronald Reagan Shipyard far below. The peak itself is crowned by the remains of what used to be the terminus for the world’s longest single-span cable car — called an aerial tramway in the US — until the cable was hit by a US Air Force Orion doing a fly-over on Flag Day, the territory’s annual national celebration. It was a double disaster because the aircraft then plummeted into island’s biggest hotel.

Tragic history aside, the cable car station is a magical spot with commanding views of Pago Pago Harbour and the island’s two highest peaks, Rainmaker Mountain and Matafao Peak, which stand guard on either side of the harbour. We sat and soaked up the view for more than an hour, watching as huge fruitbats and white-tailed tropic birds — one black, the other blinding white — swooped and soared below us.

If you’re used to tramping in New Zealand’s national parks, the walks in American Samoa might seem a little underwhelming at first.

However, if you want a taste of walking in the tropics, with well-maintained trails catering to every fitness level, you could do a lot worse than spending a few days exploring the islands’ rugged volcanic peaks and lush rainforest on foot. The scenery is spectacular and chances are you won’t have to share it with anyone.

A short walk (0.6km) which starts at a roadside layby on the way to Vatia village and descends a bush-clad ridge to a cliff edge with views of Pola Island, a skinny sliver of rock rising 120m from the sea. The island is Tutuila’s top seabird nesting site; bring binoculars to see everything from red-footed boobies (yes, that’s really what they’re called) to white-tailed tropicbirds.

A 3km ridgetop trail passing ancient archaeological sites and World War II installations built to fend off a feared Japanese invasion. Two gun emplacements have been fully restored. This is Tutuila’s most popular hike and, because it starts and finishes on the main road around Pago Pago Harbour, it’s also the most accessible.

Not one of the island’s official trails but it offers great coastal views as it skirts a jagged stretch of shore where waves crash against jet-black lava flows. Starts near Pago Pago Airport and ends at the Vaitogi turtle-calling site.

One of the most demanding trails on Tutuila, this 11km round trip starts at Fagasa Pass and climbs through lush bush to the top of Mt ‘Alava (495m) and the remains of a cable car station. Superb views over Pago Pago Harbour and most of the island.

This trail was closed when I visited due to slips triggered by Cyclone Gita in February 2018. A pity, because it sounds spectacular. Said to be the island’s toughest walk, its 56 ladders and staircases follow a route used by villagers on the north coast to reach Pago Pago Harbour before the road was built. Check at the national park office to see if it has re-opened. While you’re there you could also ask about progress in re-opening the overgrown trail to the top of Matafao Peak, at 653m the highest point on the island. A Kiwi contracting firm has offered to build a ladder scaling the cliff at the start of the trail at Fagasa Pass; once that’s done national park staff will be able to start clearing the vegetation which has choked the trail.

Pago Pago Airport in American Samoa, also known as Tafuna International Airport, is a short flight from independent Samoa. Two airlines, Talofa Airways and Samoa Airways, fly from Fagalii domestic airport in Apia. Flights take 20-35 minutes and start from about 107 tala (NZ$62). There are no direct flights to American Samoa from New Zealand (or anywhere else for that matter, apart from Apia and Honolulu).

The national park office is in Pago Pago, on the harbour of the same name, about 30 minutes’ drive from the airport. Staff can provide up-to-date information on tracks, some of which can be closed at times for storm damage or cultural reasons. There is no park entry fee. Go to www.nps.gov/npsa for more information.

Several firms offer rental cars for getting to the trailheads; otherwise the island’s ‘aiga (family) buses are fun and inexpensive. There are no schedules and they don’t run in the evening or on Sundays. The tracks themselves are well maintained but finding the starting points can be challenging because there are no road signs in American Samoa. Enlist the help of a guide, for example from Best Tours (www.touramericansamoa.com), or get hold of a map and ask for directions at the national park office. 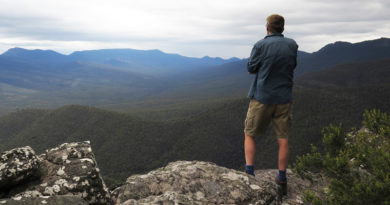 Bushwalking in the Grampians