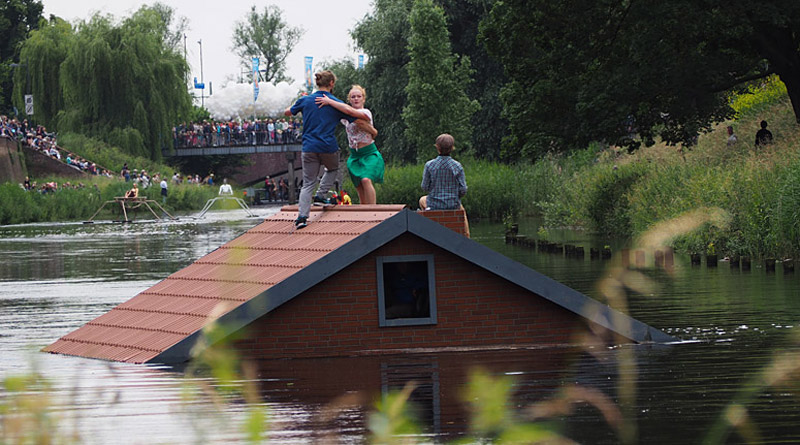 A house swept away by floodwaters drifts down a river while a couple dances the tango on the roof and a man plays the saxophone.

Men clad in orange hazchem suits leap to safety as an alarm wails and flames roar from a doomed oil rig.

Musicians coated in dust play a mournful dirge amid the rubble of a post-apocalyptic city.

These might sound like scenes from a nightmarish, dystopian future, but they are in fact floats in what is possibly the world’s strangest parade.

Click on the thumbails to see the full-size images. Story continues below. 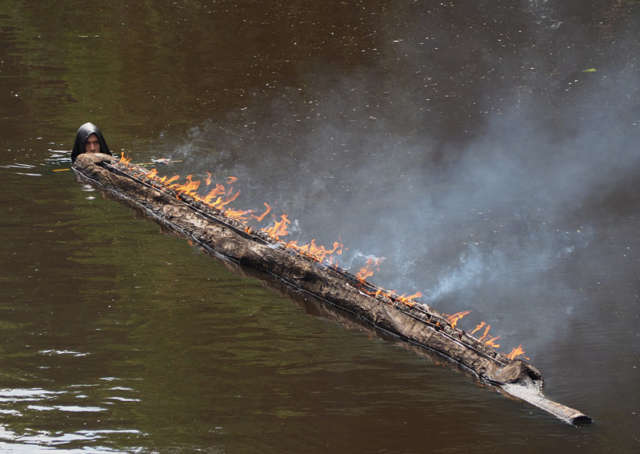 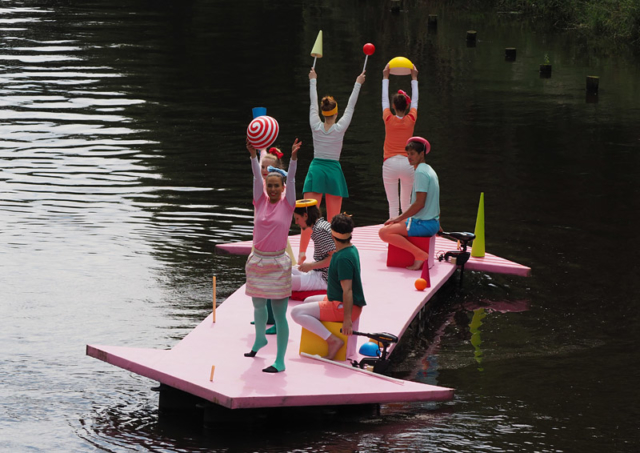 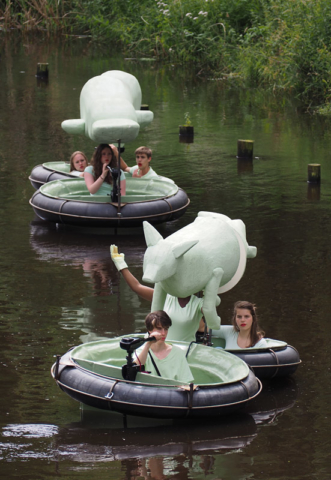 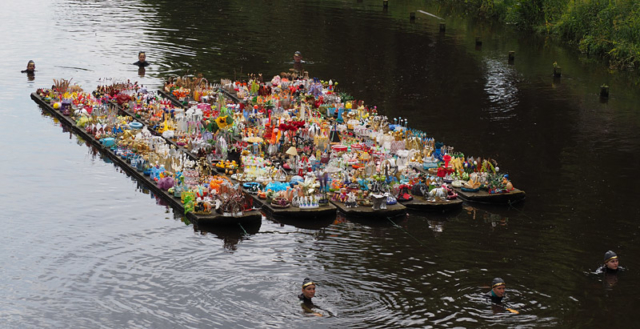 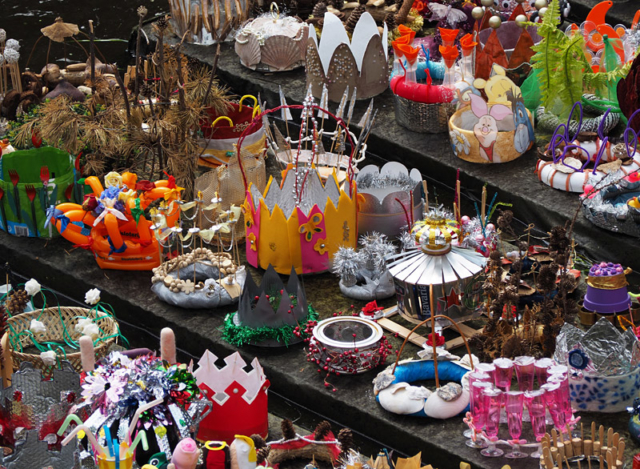 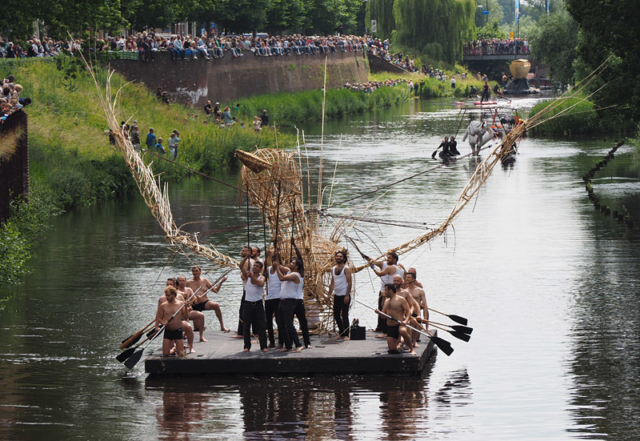 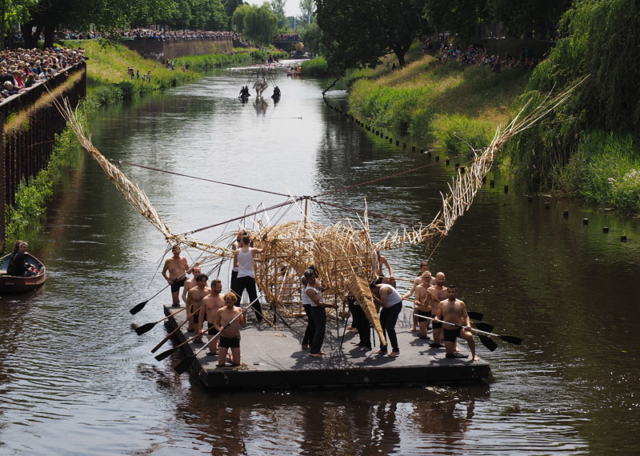 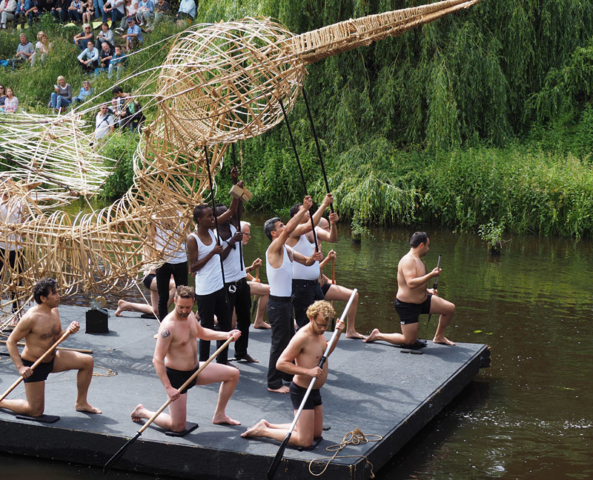 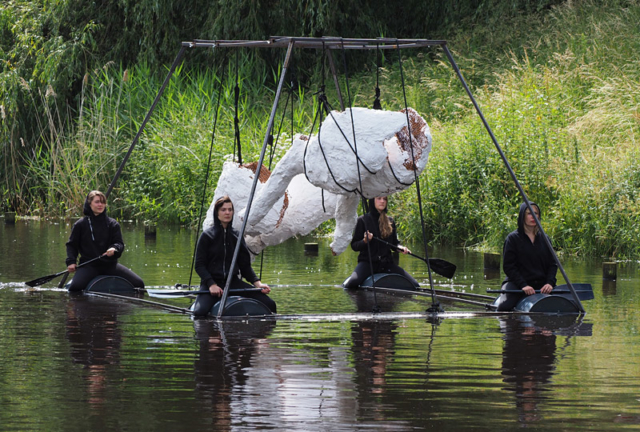 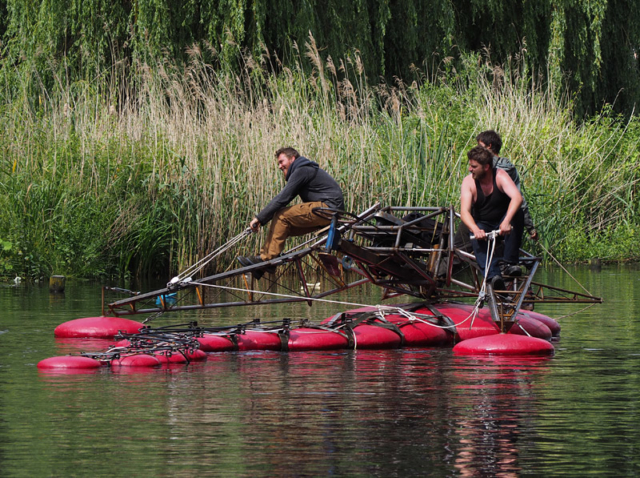 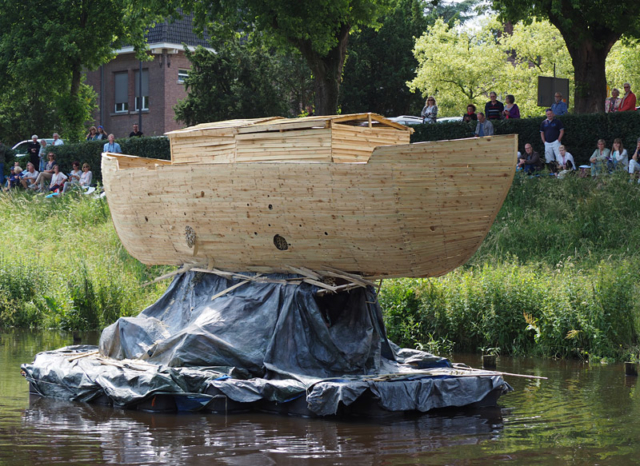 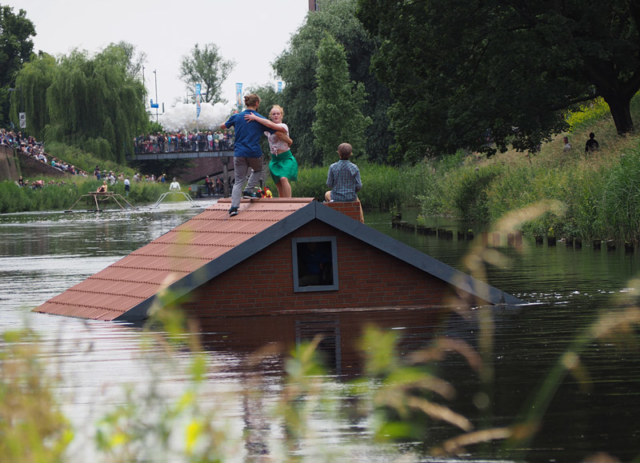 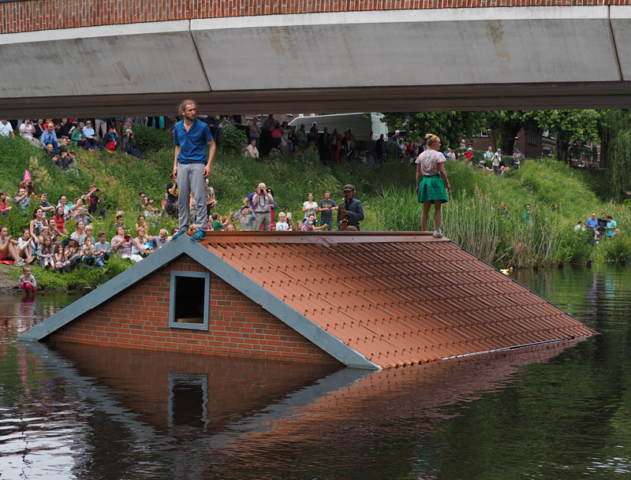 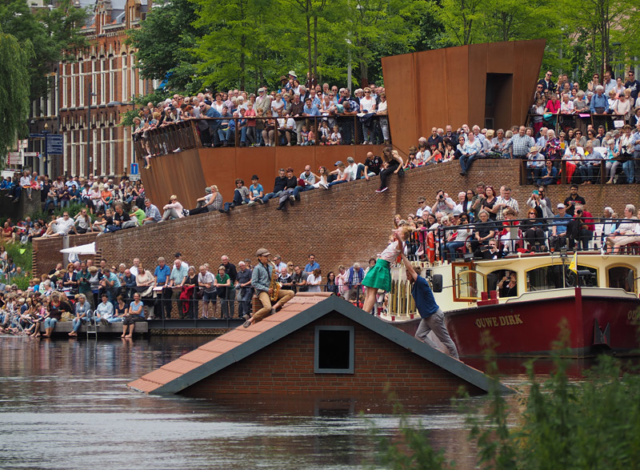 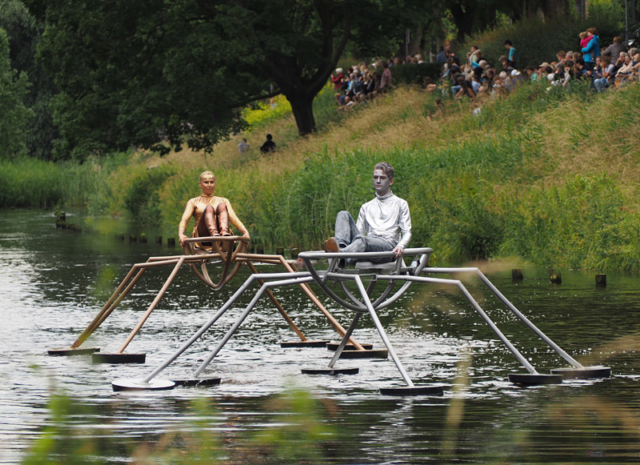 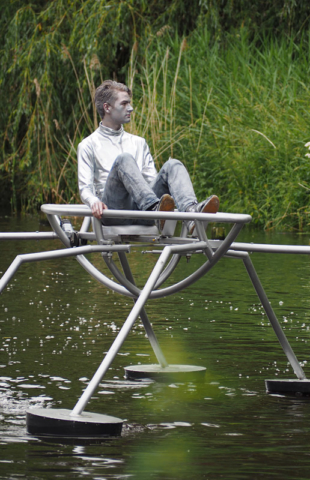 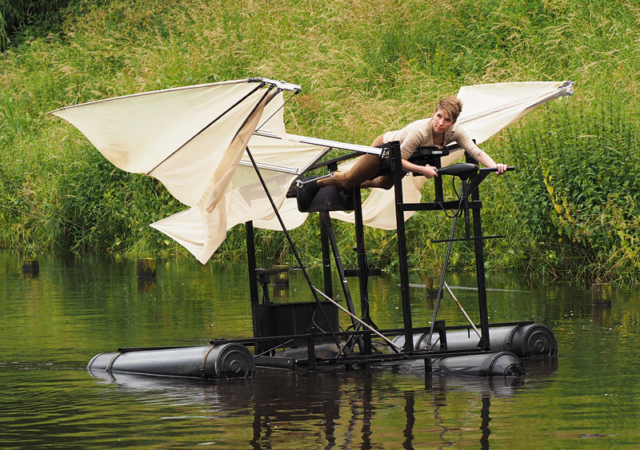 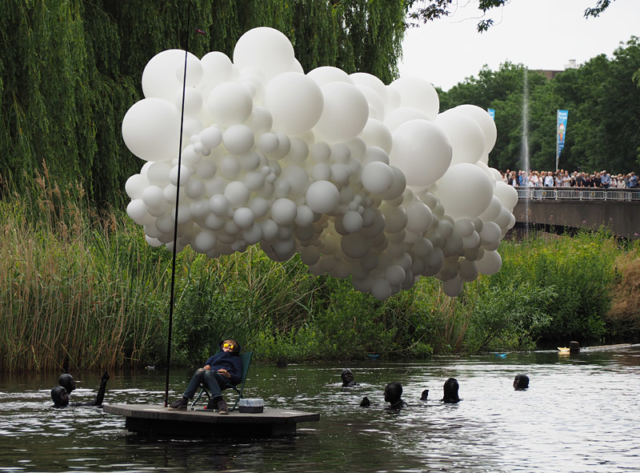 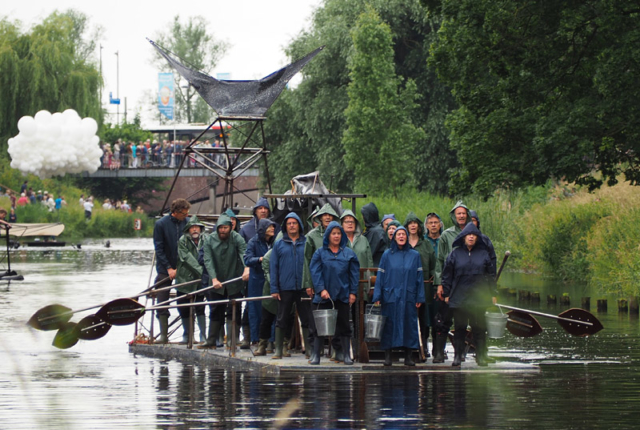 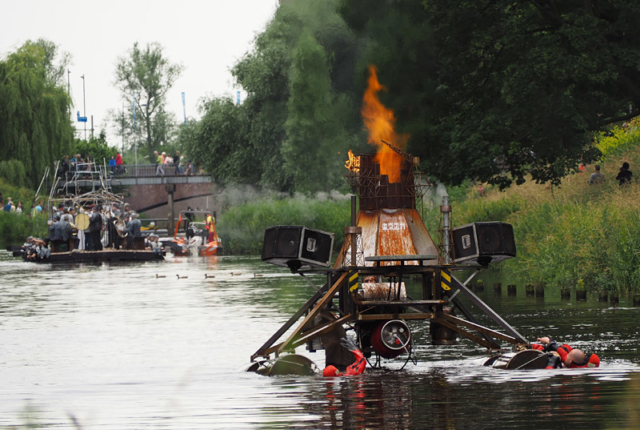 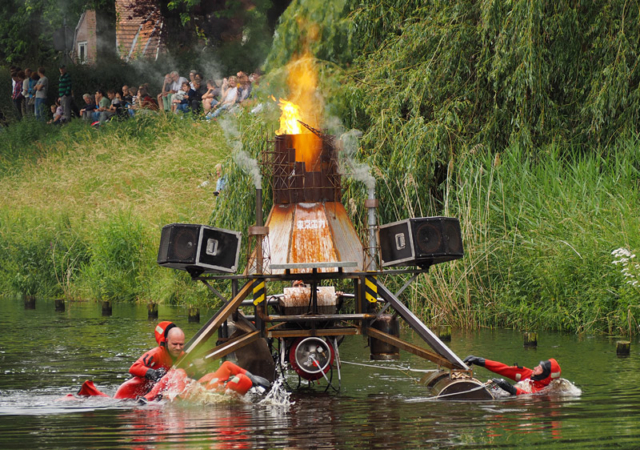 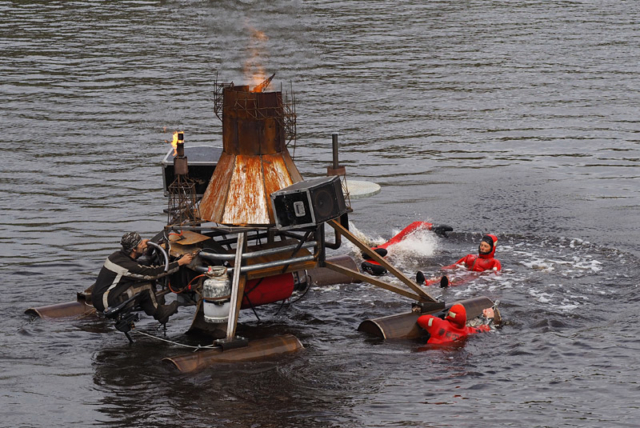 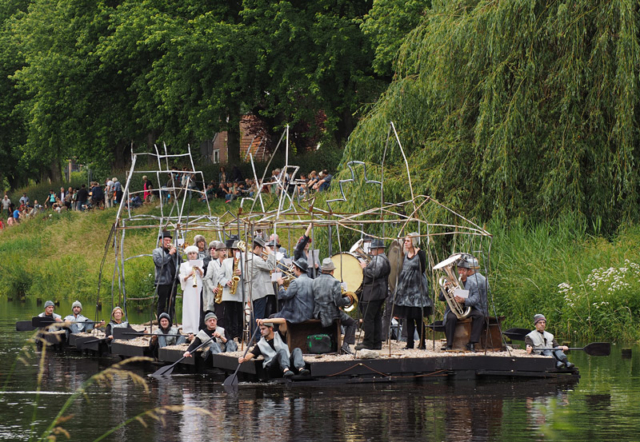 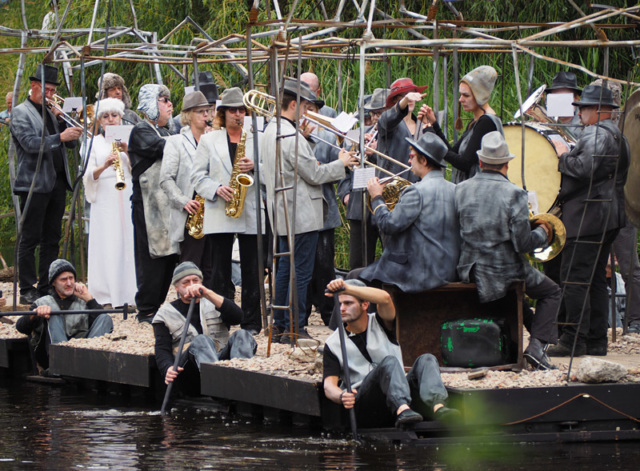 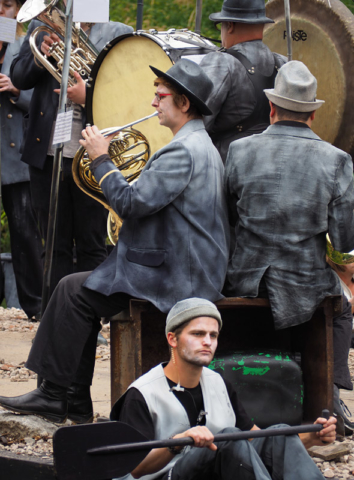 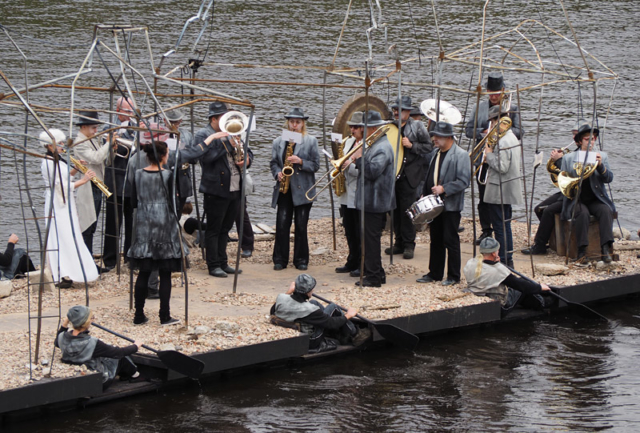 When the citizens of ‘s-Hertogenbosch, in the south of the Netherlands, wanted to celebrate their city’s most famous son, they knew an ordinary parade just wouldn’t cut it.

Instead they organised a water-borne parade as dark and fantastical as the works of the painter Hieronymus Bosch, who lived in ‘s-Hertogenbosch — or Den Bosch for short — from his birth around the year 1450 to his death in 1516.

Over the intervening centuries Bosch has become best known for his extraordinary visions of hell. His most famous painting, The Garden of Earthly Delights, is a triptych contrasting the pleasures of the flesh with the tortures awaiting sinners after death.

His paintings wouldn’t look out of place among the work of the Surrealists who lived some 400 years later.

Another thing that makes the Bosch Parade unusual — apart from the macabre creativity of the floats — is that it takes place on a river rather than a road. These floats literally float down the River Dommel as it slices through the heart of Den Bosch.

The 2016 parade, which marked the 500th anniversary of the painter’s death, boasted 18 floats with 20,000 spectators crowding the banks and bridges along the Dommel.

I was visiting cousins in a nearby town at the time so I slipped away and caught a Sunday afternoon train to Den Bosch. The parade route was just a couple of blocks from the railway station.

The parade opened with a procession of grim-faced swimmers in monastic robes pushing burning logs down the river. Called Fik, or Inferno, it was a reference to the great fire of 1463 which destroyed much of the city.

A float called We leven vrolijk verder (We live cheerfully on) recalled another disaster, the 1953 floods which claimed more than 1800 lives in the province of Zeeland, from where New Zealand takes its name. It featured a house submerged to its roof drifting downriver while a couple danced on the roof and a saxophonist played from his perch on the chimney.

Another entry was inspired by a threat from the industrial age. In Vlammende lusten, knallende lasten (Burning desires, exploding burdens) workers in orange hazard suits clung to what appeared to an ill-fated oil rig, leaping into the river each time an alarm sounded and flames erupted from its vents.

Other floats explored post-apocalyptic or Biblical themes with, for example, Kermis in de hel (Funfair in Hell) featuring a dishevelled, dust-coated brass band playing amid the rubble of a ruined city. In Verstekelingen (The Stowaways), a foundering Noah’s Ark was slowly being devoured by termites.

Despite the gloomy themes I felt strangely uplifted by the parade’s morbid genius. I was buzzing when I caught the train back to my cousin’s home.

A small-scale event is scheduled in mid-2020 with the next full Bosch Parade on June 18-21, 2021. It will be staged three times to ensure as many people as possible have a chance to see the spectacle.

If your idea of a good parade is some tinsel draped on a truck and giant-sized cartoon characters handing out candy, then the Bosch Parade might not be for you.

However, if you’re a fan of the most original medieval artist to ever wield a paintbrush, or you just appreciate the darker corners of the human imagination, you should mark your diary now. Hieronymus is waiting for you.

Thanks to Verbina Kopa for tipping me off to the Bosch Parade. Though I was staying with relatives just a half an hour away from Den Bosch by train, I hadn’t heard of this extraordinary event until she contacted me from the Bay of Islands in New Zealand, some 20,000km away. 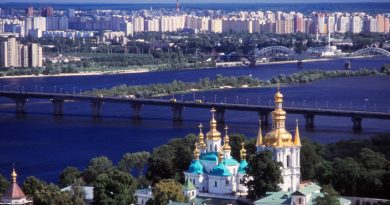 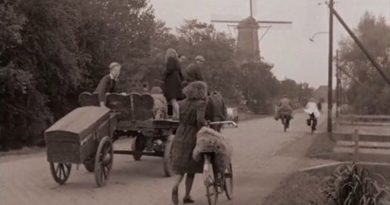 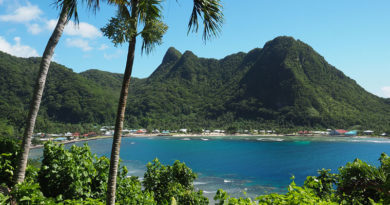