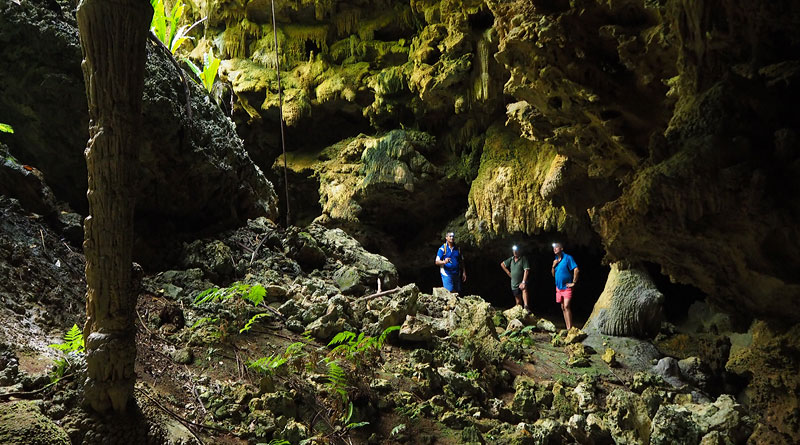 Most Pacific islands lure visitors with promises of sun-soaked beaches — but on Atiu one of the biggest attractions is a place where the sun never shines.

One of 15 islands scattered across two million square kilometres of ocean that make up the Cook Islands, Atiu is a geological oddity which has been raised over millennia from the sea, leaving its ancient coral reefs high and dry.

The result is an island with a swampy, volcanic centre surrounded by a ring of uplifted, bush-clad coral called the makatea.

Where there is raised coral there will be caves, and Atiu is riddled with them.

There are caves joined to the sea by submerged passages, burial caves crammed with skeletons, and caves dripping with legends as bloody as a B-grade horror movie.

And then there is Anetakitaki Cave.

My guide to Anetakitaki was Marshall Humphreys, “an Englishman gone troppo” who ended up on the island after marrying an Atiuan woman he met while working in a Rotorua hotel.

Their children started the cave guiding business — at one point the general manager was just 12 years old — with dad roped in only to drive customers to the start of the trail. Marshall took over once the kids left the island and, despite leading thousands of tours since then, his enthusiasm for the cave and its curious inhabitants is undimmed.

I was joined on the tour by Steve the Canadian and guide-in-training Ben. It started with a half-hour walk through the dense bush of the makatea, with Marshall explaining the uses of various plants (such as candle nuts, used for lighting before electricity arrived on the island) and pointing out botanical novelties such as the walking trees (which, in a way, really do walk, though it takes them years to get anywhere).

When we came to a sinkhole ringed by ferns Marshall issued us with head torches and led us down a ladder, then through inky darkness into a huge, half-lit chamber. Part of the cave roof had collapsed allowing sunlight to filter inside, illuminating columns, dripping stalactites, strange flowstones like molten wedding cakes and sparkling crystalline rocks.

After following Marshall through a passage filled with more speleological curiosities we emerged at a gaping cave mouth in the side of a hill. I felt like I’d stumbled into some kind of lost world. The cave mouth, which was at least 50m wide and 10m high, was almost entirely sealed by a living curtain of roots from the giant banyan trees growing on the hillside above.

Even our guides, who’d seen it many times before, seemed awed.

Marshall gave us some time to take in the atmosphere then decided it was time to introduce us to the locals living in the main cave.

The entire world population of 600 Atiuan swiftlets, called kopeka in Cook Islands Maori, live in Anetakitaki and one other cave on Atiu.

These tiny birds — adults weigh just 13 grams and measure 10cm from head to tail — are as well adapted to the tropical glare outside the cave as they are to the total darkness inside.

The birds spend up to 16 hours a day on the wing hunting small insects in the makatea, resting only inside the cave. They raise their chicks in tiny nests made from ironwood needles and saliva, wedged into niches in the cave walls or even stuck to the side of stalactites.

We could hear their high-pitched calls as they flew through the bush but the moment they entered the cave their chirps switched to bursts of rapid-fire clicks.

These clever birds navigate inside the cave using a kind of natural sonar. The echoes produced by their clicks allow them to dodge obstacles, such as stalactites and the occasional tourist, and find their tiny nests as deep as 200m inside the cave.

Bats use a similar echo-location technique but kopeka also boast perfect vision for hunting outside during the day.

When we turned off our head torches we could feel them flitting past our heads, never hitting anything despite their speed — there’s a reason they’re called swiftlets — and the confined space.

“It’s an extraordinary bird. Even if you’re not a birder your interest will be piqued,” Marshall said.

But it turned out kopeka weren’t the only living things in the cave. Our head torches also picked out cockroaches scuttling on the cave floor.

The cockroaches, Marshall said, provided an efficient cave-cleaning service by gobbling up bird poo. The roaches in turn provided dinner for the cave crabs, which explained the other scuttling noises any time our torches were turned off.

In a climate like Atiu’s even walking around in a cave is enough to work up a sweat so Steve, who was more used to shovelling snowdrifts than 98 per cent humidity, and I were keen when Marshall suggested a swim.

He led us into another passage, much narrower this time and sloping steeply downwards.

Getting down involved clambering over slippery rocks and some careful searching for footholds but at the bottom we were rewarded with a pool of pale blue water so clear it might not have been there at all.

The water was bracing but rarely has a swim felt so good. It was the perfect end to an afternoon exploring another world.

The Anetakitaki Cave tour takes up to four hours and costs NZ$40 for adults and NZ$20 for under-12s. It isn’t recommended for small children due to rough terrain on the way to the cave and the potential for falls inside. Sturdy shoes are essential; walking poles and head torches are provided. Part of the fee goes to the five families that own the cave.

The only downside of Atiu is the cost of getting there. Air Rarotonga flies between Rarotonga, the main island, and Atiu three to five days a week; as of June 2018 return airfares started from NZ$426. It’s also possible to fly between Atiu and Aitutaki. More adventurous travellers, and those with plenty of time, may be able to book a berth on the freighter which sails irregularly between Rarotonga and Atiu.

The author visited Atiu with assistance from Cook Islands Tourism. 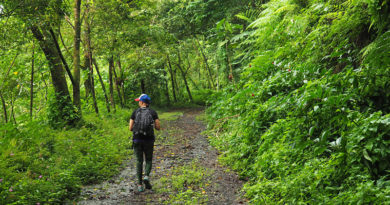 Another Samoa: Tramping in the tropics 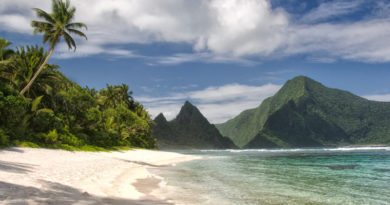 15 things to do in American Samoa

6 thoughts on “A walk in another world”