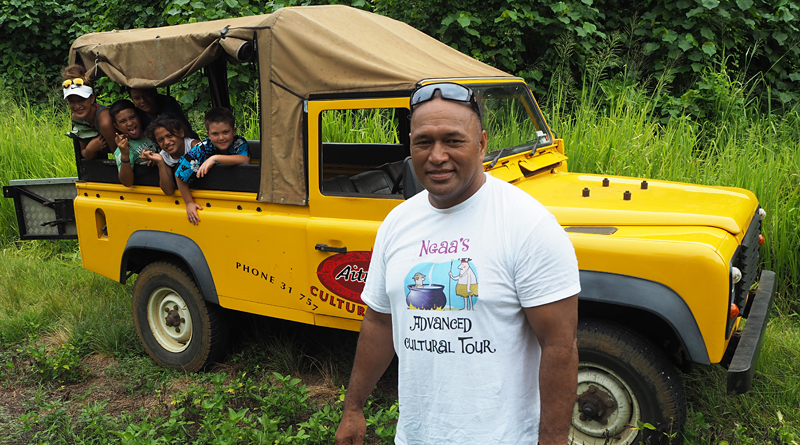 You have to hand it to the missionaries who arrived on Aitutaki in the early 1800s to impose Christianity and erase traditional Cook Islands’ culture. They did a remarkably thorough job.

Missionary John Williams, of the London Missionary Society, wrote this account in his journal in 1821:

“Our friend from Aitutaki was so full of zeal for the conversion of his brother chieftain, that, as soon as he reached the deck, he led him away from us, and commenced his work by informing him that the maraes of Aitutaki were demolished, the great idols burnt, and the smaller ones were on board the ship, to be conveyed to Raiatea, the island from which the teachers came who had instructed him.”

If you ride a scooter around Aitutaki today you’ll see churches of every denomination, the oldest built of white-washed coral and surrounded by graveyards of stone crosses. If you arrive on a Sunday you’ll see villagers walking to church wearing their finest clothes and ‘ei (flower garlands) around their heads. Your flight might even be met by locals protesting against desecration of the Lord’s Day.

What you won’t see, however, are the huge carved figures Aitutaki was once known for. The ancient marae are hidden in the bush, overgrown and avoided, their stones toppled. The traditional Polynesian art of tattooing survives but is condemned in Sunday sermons.

One man is trying to revive knowledge of the old ways but, in a devoutly Christian country like the Cook Islands, it’s a lonely battle.

Ngaakitai Pureariki (Ngaa for short) came home from Australia in the early 2000s to reconnect with his culture and land, but his crusade was sparked by a Sunday sermon a few years later.

“It was the things they were saying in church — pray, give up 10 per cent of your wages, then God will give you what you need. There was nothing about the people or the environment. It made me go the other way, to find out who we, the people of this island, are.”

The people of Aitutaki were quick to embrace Christianity because they believed it was the way to a better future, Ngaa says.

The missionaries saw the islanders’ carvings as false idols and had them burnt or shipped off the island. They banned the hongi (a traditional greeting which involves pressing noses), ironically because it helped spread diseases brought by Europeans; they also tried, with less success, to ban tattooing.

“Church leaders say we shouldn’t mark out bodies but this is about knowing who you are. Our people didn’t write, they tattooed to identify themselves, using patterns passed down through generations.”

Ngaa, who runs tours of the island’s pre-Christian sites, has no guests booked on the day I visit but agrees to take me to Arangirea Marae, one of eight sacred sites on the island.

Ngaa has cleared some of the bush from the stones and carried out an archaeological dig, finding adze flakes, sling stones and skulls.

He points out five avenues marked by rocks leading to different ritual areas, while one of his young nephews shows me the stone seat where ta’unga (priests, or tohunga in New Zealand Māori) marked a boy’s coming of age by carrying out a super-incision (a cut in the foreskin rather than a full circumcision).

“The churches speak rubbish about the marae. People are told, ‘Don’t go there, it’s a bad place’. But I love it, it has so much mystery, so much that’s unknown … it’s a puzzle that’s waiting to be completed.”

Another puzzle Ngaa is working on is the location of the 32 carved “god figures” recorded on the island before they were removed, possibly ending up in faraway museums and private collections.

He wants to find them and link them to the surviving chants on the island, which tell of Aitutaki’s history and were committed to memory in the time before writing.

Over the years Ngaa has become an expert in traditional Aitutakian arts and now travels to European museums to identify artifacts in their collections. He has been to museums in Germany, England and Spain; this year he has been invited to France and to Hunterian Museum in Glasgow.

The marae is intriguing but the mosquitoes are ferocious so, with a bunch of nieces and nephews in tow, we head to a replica village Ngaa is building on family land overlooking the lagoon.

Three days a week he leads a tour around Punarei Village illustrating traditional life on the island, which includes a chance to prepare and cook in an umu using only leaves and other traditional materials. You won’t find any tin foil wrapping here, he says.

Long-term he plans to build an education centre where local children can learn about their history; he also wants to hold regular culture nights as an antidote to the “fire-dancing rubbish” that is passed off as Cook Islands culture at the island’s resorts.

Ngaa realises his mission makes him unpopular with God-fearing Aitutakians, even his own family.

“People say, ‘There is no God in him’. I thank God every day, he created the air we breathe, the sun, the rain … But I have seen my ancestor’s work, and that’s what drives me.”

“If you ask me, do Aitutakians know their own culture, I say no, and that’s a shame. Our people have always been religious. They believed in the land and the sea that gives them life. Now people think that’s a heathen thing. Religion in ancient cultures was about the environment, about being caretakers of what’s around us.”

While it is tourists who come to see the marae he has freed from the bush, his real target is his own people.

“If you don’t know yourself or your past, you won’t know the way to the future. You will be a lost person.”

Punarei Culture Tours are held on Mondays, Wednesdays and Fridays. The author was a guest of Cook Islands Tourism. 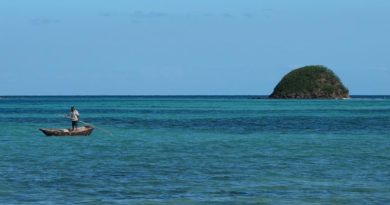