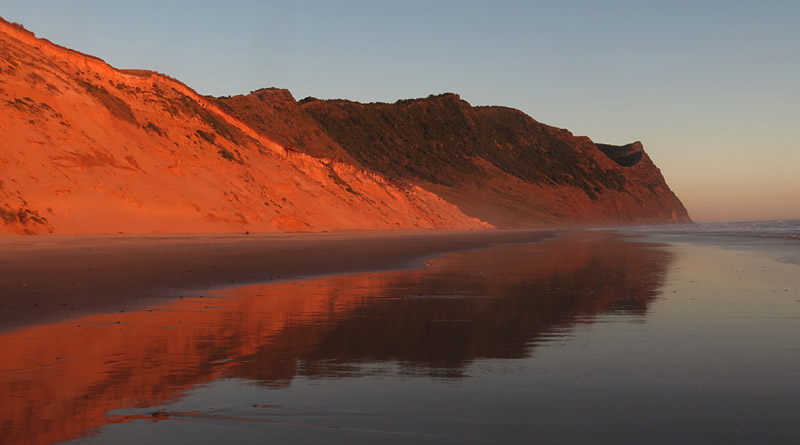 The three-day Hokianga Coastal Track along a deserted, wildly beautiful stretch of Northland coast was officially closed down several years ago — but that doesn’t mean you need to stay away.

Northland, the northernmost region of New Zealand, is not blessed with many multi-day hikes. You can blame geography for that — Northland occupies a long, skinny peninsula so there just isn’t room for big areas of wilderness — as well as the greed of 19th century loggers who made sure few large tracts of forest survived.

So when one of those few multi-day walks is closed down, it’s a great loss to lovers of the outdoors.

One such walk was the Hokianga Coastal Track. It started near the mouth of the lovely Hokianga Harbour then made its way south along clifftops and wild, deserted beaches before climbing over the 459-metre high Maunganui Bluff and finishing at a series of pretty dune lanes.

The good news, however, is that it’s still possible to walk it, with a few precautions. And because it’s officially closed and has no services such as huts, campgrounds or drinking water, there’s a good chance you’ll have it entirely to yourself.

The Hokianga Coastal Track has been removed from the Department of Conservation’s list of Northland walks. The department’s website does, however, offer descriptions of the first section from South Hokianga Head to Waimamaku River and the last section over Maunganui Bluff, treating them as day walks (even though the latter would require you to slog for five hours then turn around and walk back the same way).

If you call the department’s Kauri Coast office they’ll tell you the track is closed due to land ownership issues and that you risk being trespassed. However, if you insist you’re still keen, they may offer you a useful information pack. They can even supply a GPS track file though it would be pretty hard to get lost.

You can walk the track in either direction but it’s usually done north to south, which is the way I’ll describe it here. That way you hit Maunganui Bluff on the last day when your pack is lightest.

One crucial thing to take into account is the tides: You need to reach Waimamaku River about two hours either side of low tide or you’ll have to swim across, pack and all. Waimamaku River is about four hours walk from the starting point at South Hokianga Head.

Part of day two involves crossing private land. Most of the route is along the beach where you’re fine, because under New Zealand law the intertidal zone — between the high and low tide marks — is publicly owned.

The area around the old Kawerua Hotel is owned by the local iwi (tribe) Te Roroa. Be discreet and ask permission if you bump into anyone. If you’re polite and don’t act like you own the place you’re likely to be welcomed.

Wherever you are, carry out your rubbish and don’t light a fire if fire restrictions are in force (which is pretty much all summer in this area). And when you poo, do it at least 50m from any track or waterway and bury it. It’s staggering how many people ignore this basic rule of the outdoors.

Safe drinking water is in short supply along the route. Many streams cross farmland before they reach the coast so you’ll need to boil or treat the water before drinking it. I found a few decent streams early on the second day but only smelly, farm-polluted creeks once I got close to Maunagnui Bluff, and no water at all during the climb. Carry as much water as you can.

This isn’t a bush walk and apart from a short section on Maunganui Bluff you’re exposed to the elements all the way. Come prepared for rain and fierce sun. There’s plenty of opportunities for swimming (be careful, these beaches are dangerous) and fishing.

You can download topographic maps for free at www.topomap.co.nz (click on ‘More’ then ‘Downloads’). The sheets you want are AW26 – Hokianga Harbour, AW27 – Rawene and AX27 – Aranga. Don’t bother with Google maps, even their topographic versions just don’t have the detail to be any use.

If you’re coming from Ōmāpere keep following State Highway 12 west; just after the highway swings south and starts climbing uphill you’ll see Signal Station Road on your right. There’s a car park at the end of the road but don’t leave your vehicle here overnight — it’s a notorious spot for break-ins. Get someone to drop you off or leave your car at a safe place in Ōmāpere and hitchhike or walk to the start of the track.

If you’re arriving from the other direction via Waipoua Forest, Signal Station Road is on your left just after you come over the crest of a hill and a magnificent view of the Hokianga dunes opens up in front of you.

Start walking towards toward the lookout and you’ll soon see the Waimamaku Coastal Track on your left. Make sure you check out the lookout first though. When the sun strikes the dunes and waves are crashing over the bar at the harbour entrance, it’s one of the most beautiful views in Northland.

For much of the next four hours the track follows a fenceline along the clifftops with occasional descents to the beach. The track isn’t always clear but it’s hard to go wrong for long.

After four hours you’ll reach Waimamaku River. If you’ve had enough at this point, head upstream and you’ll soon hit a gravel road taking you back to State Highway 12.

If you want to keep going you’ll have to cross the river. At low tide it’s only thigh-deep but at high tide it’s at least chest deep and can pack a powerful current, hence the need to plan ahead. You can check out a tide chart here.

The track continues south along Kaikai Beach for about an hour before cutting through pine forest to avoid an impassable stretch of coastline.

It’s pretty clear where you have to go — a wide trail climbs a dune into the forest next to a Department of Conservation warning sign saying the track is closed and all markers have been removed.

If you stick to the forest track that runs parallel to the coast you can’t get lost. Ironically, fragments of smashed track markers scattered along the route help keep you on the right track.

After about 2km you descend to the Ōhae Stream. A grassy area of public land by the stream mouth makes a fine camping area for the night.

From the Ōhae Stream continue through the forest for about another 3km, bearing in mind that this is one of the sections that crosses private land. Keep an eye out for the derelict Kawerua Hotel, all that remains of a once bustling forestry settlement. The historic building is owned by Te Roroa.

Soon afterwards you drop back down to the beach, where you stay for the rest of the day. You’ll have to cross the Waipoua River but it’s unlikely to pose any difficulties. You’ll also pass a series of lagoons ideal for a refreshing dip.

All day you’ll have seen Maunganui Bluff looming in the distance. When you finally reach the foot of the Bluff you’ll see a small boulderly stream. Head a short distance upstream and you’ll hit a farm track and an official camping area.

It’s not terribly appealing — there’s no shelter and the stream is polluted — but the location, just before the climb over the Bluff, is good. I got drinking water by backtracking about 20 minutes up the beach to a series of streams trickling down a cliff.

From the campsite at North Maunganui Bluff the track hops a gate and crosses paddocks before beginning the long, slow slog up the ridge. Make sure you stick to the track — you’re back on an official walkway so keep an eye out for the orange triangles that mark the route — and if you see the farmer say thanks for allowing access.

The walk up the ridge is the most demanding part of the three-day trip but it’s possibly also the most spectacular.

The first few hours are open with steep drops on either side and only a few wind-sculpted trees clinging to the ridge, so you can enjoy unimpeded views up the coast and across Kaipara farmland.

Further up there’s a remarkable kōwhai forest (a native tree with yellow flowers loved by birds such as the tūī) which would make an amazing sight in the spring.

At some point the track swings into the bush and away from the ridge. I was so transfixed by the views I missed it and had to spend a bit of time searching and bush-crashing to get back on track.

Once you emerge from the bush there’s no view of the sea but a long and morale-sapping slog beside a farm fenceline down to a saddle, then back up another steep hill to the top of the Bluff. From the summit it’s an easy hour’s descent on a well-formed track to the settlement of Aranga Beach. The walk from North Maunganui Bluff to Aranga should take about five hours.

From Aranga Beach you have a couple of options. You can continue south for another 8km or two hours on the Kai Iwi Lakes Coastal Track, first along the wide and wild Ripiro Beach then over farmland to a series of pretty dune lakes popular with holidaymakers. You can choose between two council-run campgrounds, one with toilets and running water only, the other with full amenities.

Alternatively, you can finish your walk at Aranga Beach. If you haven’t arranged a pick-up it’s a 7km walk on Aranga Beach Rd to get back to State Highway 12. From there it’s reasonably easy to hitch-hike the 45km back to Ōmāpere.

In a corner of a foreign field 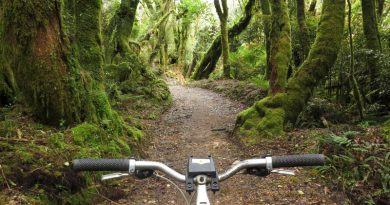