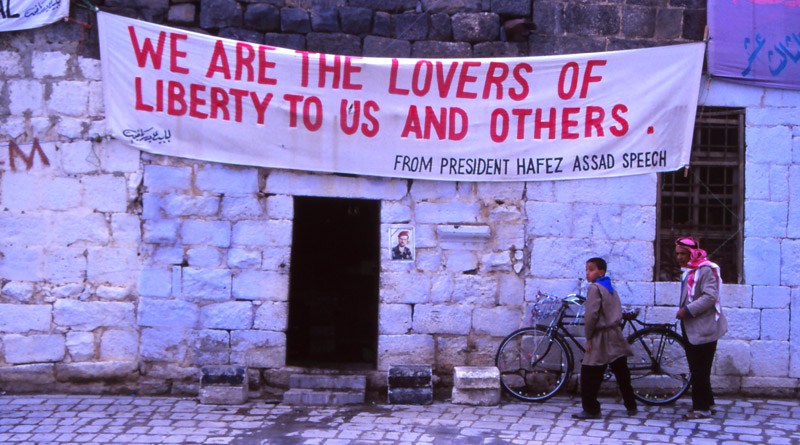 Almost 25 years ago I had the time of my life travelling overland from the Czech Republic to Cairo by bus, train, hitchhiking, on foot and occasionally by bicycle.

I couldn’t pick out a single highlight but the three weeks I spent in Syria would be up there. I always wanted to go back — once I even harboured a naïve plan to live in Damascus for a while, teaching English, hanging out in tea houses and learning Arabic — but history had other ideas. I’ve watched sadly from afar as many of the places I visited have been torn apart in a vicious civil war which started with the Arab Spring of 2011.

Now, when I look back through these photos, I wonder what has become of the people who welcomed me so warmly in 1995. What horrors have they seen? Are they among the millions living in squalid refugee camps in Turkey and Greece? Are they even still alive?

I’ve also tried to find photos to show what the same places look like today. Those are of course not my pictures; wherever possible I’ve named the source or the photographer. Please contact me if it’s your image and I’ve used it without proper attribution.

The crusader castle Krak des Chevalliers is one of the world’s great medieval castles and a UNESCO World Heritage site. It was built in the 11th century to guard the Homs Gap in the mountains of western Syria, then expanded by the Order of Knights of the Hospital of Saint John of Jerusalem, who held it from 1142-1271.

Believe it or not, you are very familiar with this ancient order of knights. These days they take a simpler name, The Order of St John, and operate most of the ambulance services in New Zealand.

The castle and its setting high in a bleak mountain range are spectacular, but to be honest I didn’t spend much time exploring because I was sidetracked by a wedding in the village square below.

With typical Arab hospitality the villagers insisted I join in and pretended not to notice my inability to keep time in a basic circle dance. They even invited me back to the family home where I was fed huge bowls of chickpea stew and chicken and treated like a guest of honour.

Unfortunately, a strategic military location in the 12th century is still a strategic location in the 21st century. The castle was captured by rebel forces early in the war, shelled in 2012 by the Syrian army and hit by an airstrike during the Siege of Homs in 2013 before it was recaptured by Syrian government troops in 2014.

Luckily the damage, except to the crusader chapel, was not severe. Conservation and reconstruction work has been underway since 2014.

Arwad is the only inhabited island off the Mediterranean’s eastern shore. It’s little more than a speck of rock with 4000 inhabitants squeezed into its 0.2sq km. When I visited boat building was still the main industry. I had a great day exploring the island’s narrow alleyways and picturesque, though filthy, harbour.

My strongest memory from Arwad is of a boy aged about five who spent the entire morning marching around the island banging a drum. When he finally wore himself out he sat down at a street corner, too exhausted to notice me taking a photo.

Arwad was apparently one of few places in Syria untouched by the war, but I wonder what happened to the drummer boy. He would have turned 18 a couple of years into the war, the age of conscription for the Syrian army.

When I visited Syria in 1995 Aleppo was the country’s biggest, most cosmopolitan city and its commercial heart. The old city, a UNESCO World Heritage site, had changed little since it was built in the 12-16th centuries. A forbidding citadel built atop a huge artificial mound at the centre of the city is even older, dating back to the first millennium BC.

But what I really loved were Aleppo’s souqs or covered bazaars. I spent days wandering around in kilometres of passages covered by vaulted stone roofs and lined with tiny shops selling spices, nuts, wool, gold, clothing and carpets. Entire blocks were dedicated to blacksmiths and copper workers, and because the alleys were too narrow for cars everything was delivered by heavily-laden donkeys ridden at ridiculous pace by whip-wielding boys.

It was like a scene from The One Thousand and One Nights and so vast every time I got lost it would take me a couple of hours to find my way back out to daylight.

Aleppo is one of the great tragedies of the Syrian civil war. The Battle of Aleppo lasted four years, from 2012-16, and claimed an estimated 31,000 lives. It was marked by widespread violence against civilians, alleged targeting of hospitals and schools, indiscriminate aerial strikes, and claims of chemical warfare.

The Syrian government’s eventual victory, with Russian backing, was the turning point of the war. In 2016 UNESCO stated 60 per cent of the old city had been severely damaged and 30 per cent totally destroyed.

Maaloula is a small and ridiculously picturesque town in the mountains just north of Damascus. Its Christian inhabitants still speak Aramaic — the language spoken by Christ 2000 years ago — and live in a warren of tightly packed blue and white houses wedged against a cliff, which is topped by an orthodox monastery.

Unfortunately even pretty Maaloula was the scene of heavy fighting. The town changed hands several times in 2013, from the jihadist Al-Nusra Front to the Syrian Army and back, before it was finally recaptured by government forces in 2014.

Although many of the town’s religious treasures were damaged they have since been restored. The rebuilding of Maaloula was symbolised by the unveiling in 2015 of a new statue of the Virgin Mary, replacing a sculpture destroyed two years earlier.

Hama, a city in central Syria, is famous for a series of ancient water wheels built as long ago as the 11th century to pump water from the Orontes River to the city’s fields and gardens. When I visited in 1995 the water wheels, which are up to 20m in diameter, were still turning, though more as a tourist attraction than a serious means of irrigation.

Qala’at ar-Rahba is a ruined 13th century castle with an evocative name (it means “Citadel of Dread”) in eastern Syria, near the Euphrates River. Yes, the castle was cool, but it was nothing compared to the hospitality of the locals.

I was walking back to the main road hoping to catch a bus back to the city where I was planning to spend the night when a girl of about 13 called out to me. She was carrying a bundle of twigs bigger than herself and she was very excited to be able to practice the English she’d remembered from primary school.

I was ushered into her home, the most basic I’d seen in Syria with just a few mats on the gravel floor of its single room. The only furnishings were a stove, a cassette player and small TV.

She brought out the best cushions and her dog-eared English textbooks while her siblings brought me endless cups of tea; later I was whisked to another house in the village, more salubrious but still just one room with no furniture and an outdoor kitchen.

Gradually all the gloriously moustached men of the village turned up while girls darted in and out piling a platter in middle of the room high with a mountain of chicken, bread and tomatoes.

Only once I’d gorged myself (fingers only, rural Syria is a cutlery-free zone) would the men eat, and then the boys. I don’t know when or if the girls ate — they just crowded around the door looking at the strange being that had wandered in to their village, running away giggling any time I tried to thank them for dinner.

Once the feast was over a pile of mattresses appeared and we slept where we were. Even though it was one of the fancier homes in the village, toilet etiquette was simple. I was given a jug of warm water for washing, then pointed outside into the desert.

The next morning my hosts would have insisted on driving me to the city but, fortunately, no one could find a vehicle that would start.

I met a few dodgy people in Syria, a creepy secret policeman and a greedy restaurateur, but the vast majority of my experiences were like my night in the village near Qala’at ar-Rahba: Extraordinary hospitality with no desire for anything in return.

Eastern Syria was one of the strongholds of ISIS (Islamic State in Syria) during the civil war. Government forces clung on in part of the main city, Deir az-Zor, but ISIS was only driven out of the countryside in 2019. I often wonder was life was like for my hosts during those years. It can’t have been good for the girl who first invited me in and her delightful sisters. It can’t have been good for anyone.

Deir az-Zor is the biggest city in eastern Syria.  It was another focal point of anti-government protests at the start of the war. Its most famous landmark was a pedestrian suspension bridge over the Euphrates River. The bridge was destroyed by Syrian army shells in 2013.

If you travel east from Damascus you will see nothing but stony desert for more than 200km. Then you will reach the oasis of Palmyra, once one of the great cities of the ancient world and now a UNESCO World Heritage site.

Palmyra grew rich in the third century AD because it controlled the only water for hundreds of kilometres, making it a compulsory caravan stop on the Silk Road linking Asia and Europe. The city’s inhabitants spent their wealth on temples, grand colonnades and tombs. Its power faded after about 270AD but many of its buildings were still standing when I visited in 1995.

The Greco-Roman buildings, such as the Temple of Bel (completed in the year 38AD), and the Great Colonnade got most of the attention back then, but my favourite part of the city was a necropolis of four-storey-high tower tombs. I also loved the 13th century Arab castle, Qala’at ibn Maan, which towers over the ancient city.

The Temple of Bel was blown up by ISIS fighters shortly after they captured Palmyra in 2015. Its main entrance, exterior walls and fortified gate are, however, still intact. Another temple, Baal Shamin, was completely destroyed.

ISIS also blew up the three best-preserved tower tombs, part of the castle, the 3rd-century Tetrapylon, and the Monumental Arch. Syrian government officials say the arch can be rebuilt. Most of the castle survived and will also be restored.

Palmyra changed hands a number of times in the fighting between ISIS and the Syrian army. It was recaptured for the last time by government forces in March 2017.

Read more: Here’s a great visual guide from The Guardian showing Palmyra before and after the civil war. 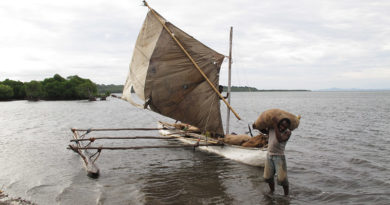 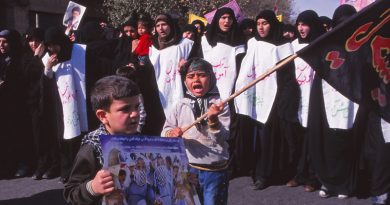 Inside the Axis of Not-So-Evil 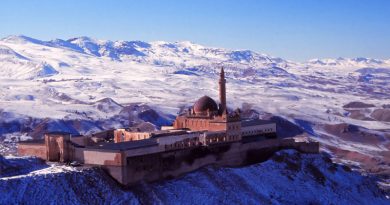