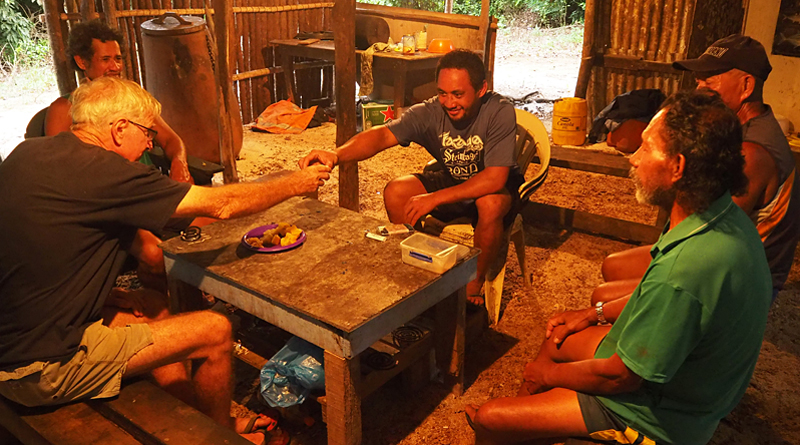 They call it The Walking Dead because, well … it’s fairly obvious really.

After a decent session at this home-brew bar in the Cook Islands bush, they say you’ll go home with the shuffling gait and the glazed eyes of the undead.

Maybe I just didn’t drink enough because when it was time to leave I was a bit unsteady and undeniably prone to the giggles, but hardly zombie material. I did sleep very soundly, however, and that wasn’t just because I was staying on a very quiet island.

The Walking Dead is a tumunu or traditional bush bar on Atiu, an island of fewer than 500 people about 45 minutes by plane from Rarotonga. The name comes from tumu, the Cook Islands Māori word for trunk, and nu, or coconut, because the brew was originally made in the hollowed-out stumps of coconut palms.

Tumunu were around long before disapproving missionaries had them banned and remained illegal until the mid-1980s. That long prohibition explains why even now they are hidden deep in the bush.

Each tumunu has its own clientele and closely guarded recipe, but all brew something that can loosely be described as beer using the oranges that grow wild on Atiu.

The result, which takes about three days to prepare, tastes more like a slightly fizzy fruit wine than beer. It’s surprisingly palatable but deceptively strong — usually around 12 per cent — which only becomes apparent when you try to stand up.

Brewing your own beer makes a lot of sense in a place like Atiu. People are rich in land and all it produces but often cash poor, so popping down to the shop for an imported six-pack isn’t an option. Neither is going to the pub because, quite simply, there aren’t any. Making and drinking bush beer is also a highly sociable pastime.

My guide to the tumunu of Atiu was Roger Malcolm, who ended up on the island almost 40 years ago after falling for a local girl. He is now an accepted Atiuan and a regular at The Walking Dead.

Drinking protocol at a tumunu is simple. After being invited in by a local you take a seat around a table, usually in a timber and corrugated iron shelter partly open to the bush. The barman serves each person in turn, using a small coconut shell cup filled from a bucket. You accept the cup in one hand and down it in one.

It’s a small cup but rounds come quickly so it doesn’t take long to start feeling the effects. You’re allowed to skip the odd round and starfruit, papaya and coconut snacks help offset the alcohol. A skilled barman will adapt the pace and volume in each cup to make sure everyone gets drunk at the same rate.

When it’s time to go non-members are expected to leave a donation — NZ$5 is usually enough — to help cover the costs of the next batch.

Conversation at The Walking Dead wasn’t very different to what you’d hear in any New Zealand bar. There was a lot of good-natured teasing and talk about the quality of the beer — the regulars at every tumunu assured me I was drinking the island’s best brew — and about love.

That evening the love life of Koro, a navigator who has sailed the Pacific on double-hulled voyaging canoes, was open for dissection. I was told how the sight of this bearded, long-haired seafarer stepping ashore had captured the heart of a beauty many years his junior but the relationship hadn’t been entirely smooth sailing since then, providing great fodder for discussion as the coconut shell made its rounds.

It also turned out that Koro and I had a mutual acquaintance back in New Zealand, proving once again how small the world really is.

Later Roger explained that when missionaries arrived on Atiu they did their best to suppress “the devil’s drink”. Laws were passed that drove the tumunu into hiding in the bush and church-goers who dobbed in brewers were given a cut of the fine. Women tired of drunk husbands would go looking for tumunu and tip out the beer.

“But there’s nothing like persecution to make something stronger,” Roger said.

The tide started turning when the German ambassador visited Atiu for a Sunday school opening in 1983. His host, the Cook Islands Minister of Police, had to entertain him that evening so took him to a tumunu, where the ambassador upheld national pride by drinking everyone else under the table.

The irony of an overseas dignitary being taken to an illegal establishment under police escort was not lost on the Atiuans. Emboldened, tumunu starting moving out of the bush into the villages, prompting a backlash from the church and a police crack-down. They retreated back into the bush and have remained there ever since, even after tumunu were legalised in 1985.

When Roger first arrived on Atiu, then a bustling island of 1500 people, it was home to 11 tumunu. As the island’s population has shrunk so too has the number of bush bars. Now just five remain, including one run by women for women.

The following night I was dropped off at a different establishment. This one was called Aretou, after the mahogany trees once common on Atiu, and placed greater emphasis on décor with tree-stump seats painted lime green and walls decorated with flags donated by past visitors.

Out hosts were Toru, the barman, and Tai, the tumunu chairman, who was stirring the next batch of beer, so far still a murky brown liquid in a plastic pail.

Tai wasn’t giving much away about his recipe but, apart from oranges, most tumunu use sugar, natural yeasts present on the skin of the fruit, hops and malt. Because brewer’s malt is subject to a 40 per cent tax a malt-based children’s dietary supplement is used instead, which is tax free.

Toru said the rules for joining were simple.

Women were allowed to drink but couldn’t register as members. On Friday or Saturday nights up to 12 people would turn up and drink half a bucket of beer. There were no set opening or closing times and because everyone walked home there were no problems with drink-driving.

“We usually say ten cups is enough. But we don’t really know, because no one ever counts. When you have had enough you go home.” 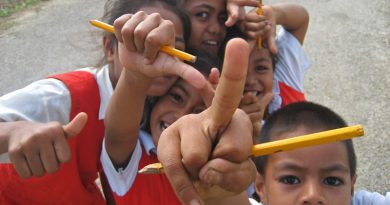